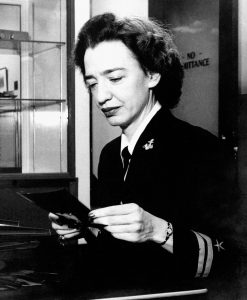 Who is Grace Hopper?

“Sometimes people think Hopper was ‘only’ a foundational computer scientist or ‘only’ a naval officer,’ but that was just the beginning,” said Julia Adams, head of Grace Hopper College and professor of sociology. “It’s important that people realize that she had four or five illustrious careers, each of which would have done her great honor: mathematician, foundational computer scientist, naval officer, teacher, and public intellectual.”2

Born Grace Brewster Murray on December 9th, 1906, in New York City. She was a very curious child and curiosity was a lifelong attribute.  At 17 she was accepted to Vassar College and earned a bachelor’s degree in mathematics and physics, graduating in 1928. She attended Yale University and earned a master’s degree in mathematics in 1930.  After her master’s she became a faculty member at Vassar College in 1931. She was a professor of mathematics at Vassar while earning her doctoral degree from Yale University in 1934.1

Grace taught at Vassar until 1943 when she joined the United States Naval Reserve to serve her country during World War II.  The next year she was commissioned as an officer, a lieutenant.  She was assigned to the ‘Bureau of Ordinance Computation Project at Harvard University. This presented her the opportunity to work in the university’s Cruft Laboratories on Mark I computers, the first large-scale automatic calculator and a predecessor of electronic computers.1 Mark I was used in the war effort during the last part of World War II. 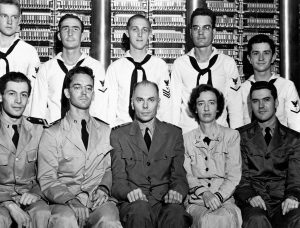 Grace Murray Hopper (seated, second from right) and Howard Aiken (seated, center), along with other members of the Bureau of Ordnance Computation Project, in front of the Harvard Mark I computer at Harvard University, 1944.

In 1946, Grace resigned from Vassar to become a research fellow in Harvard’s computation laboratory while maintaining her naval career as a reservist.  She took up the position in applied physics and engineering and continued her work on the Mark II and Mark III. She wrote the first computer manual titled A manual of Operation for the Automatic Sequence Controlled Calculator (1946). This manual described how to operate the Mark I and was the first to describe how to program a computer.

In 1946, after a moth infiltrated the circuits of Mark II, she popularized the term bug to refer to unexplained computer failures.1 This bug was carefully removed and taped to the logbook.3  The term bug is still used today to describe an error in a computer program/system.3  (It was very exciting for me as a software tester to learn that a woman used the term bug to describe a failure.  Now whenever I find bugs while testing, I will think of Grace Hopper and her contributions to future women in STEM.)

Grace Hopper joined the Eckert-Mauchly Corporation in 1949, which was taken over by Remington Rand in 1950. Eventually, Remington Rand merged with Sperry Corporation which is known today as Unisys.  She continued her work on computers and helped with the creation of UNIVAC, the first all-electronic digital computer.  She invented the first computer compiler, a program that translates written instructions into codes that computers read directly.5  Eckert-Mauchly hired other women from the Moore School of Electrical Engineering (the birthplace of the computer industry). These women were Kathleen McNulty, Betty Holberton, and Jean Bartik. 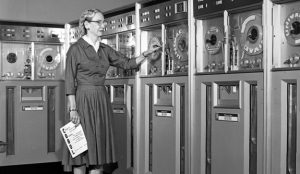 Hopper believed that computers would someday be widely used and helped to make them more user-friendly. (Courtesy of the Computer History Museum)

In the 1950’s computer programming, data processing, and installation of many different computer programs were expensive.  In 1959 Mary K Hawes called a meeting of like-minded computer scientists, academics, and companies together to create a computer language that could be used in several settings. Hopper’s work on the UNIVAC led her and colleagues to develop one of the earliest standardized computer languages called COBOL.  COBOL stands for common business-oriented language and enabled computers to respond to words in addition to numbers.  Other women on this team included Jean E Sammet, Betty Holberton, and Gertrude Tierney.  In 1957 her division developed Flow-Matic, the first English-language data-processing compiler, which had many features that inspired the development of COBOL.1 Hopper thought that data processors would be more comfortable with word-based computer languages because they were usually not mathematicians or engineers.2 Her desire was to make computers languages more user-friendly.

During her work as a computer scientist, she remained with the Naval Reserve.  In 1966 she obtained the rank of Commander and in 1967 she was called back to active duty. She was assigned to the Chief of Naval Operations staff as Director, Navy Programming Languages Group.5  She held this position for many years during which she was promoted to Captain in 1973, Commodore in 1983, and finally Rear Admiral in 1985.5  At 79 years old, she was the oldest officer on active U.S. naval duty before she finally retired in 1986. 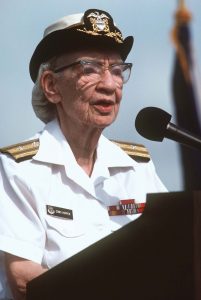 In her later years with the Navy, she advocated for the creation and standardization of different computer languages within the Department of Defense (DoD).  Hopper wanted the DoD to replace large centralized systems with networks of small, distributed computers. Any user on any computer node could access common databases located on the network. She developed the implementation of standards for testing computer systems and components, most significantly for early programming languages such as FORTRAN and COBOL. The Navy tests for conformance to these standards led to significant convergence among the programming language dialects of the major computer vendors. In the 1980s, these tests (and their official administration) were assumed by the National Bureau of Standards (NBS), known today as the National Institute of Standards and Technology (NIST).  VVMS adheres to NIST standards in our computer programs.

Grace Hopper continued to teach throughout her lifetime.  She was a gifted teacher and communicator.  Hopper was a visiting and adjunct lecturer at the Moore School of Electrical Engineering.  She served as a professorial lecturer in the management sciences at George Washington University from 1971 to 1978.  Outside of formal academia, she organized workshops and conferences to promote the understanding of computer sciences and programming.  Hopper was giving up to 300 lectures per year.5  She told her biographer that her greatest joy came from teaching.7

Throughout her lifetime and posthumously, Grace Hopper was presented with many military awards and other achievements/honors. These are included in this blog to show the enormity of her accolades.  She really was an amazing woman in STEM.

Other Awards and Honors:1,6

1955: Hopper was one of the founding members of the Society of Women Engineers.

1962: Elected fellow of the Institute of Electrical and Electronics Engineers.

1964: Hopper was awarded the Society of Women Engineers Achievement Award, the Society’s highest honor, “In recognition of her significant contributions to the burgeoning computer industry as an engineering manager and originator of automatic programming systems.”

1971: The annual Grace Murray Hopper Award for Outstanding Young Computer Professionals was established in 1971 by the Association for Computing Machinery.

1973: Elected to the U.S. National Academy of Engineering.

1973: First American and the first woman of any nationality to be made a Distinguished Fellow of the British Computer Society.

1982: American Association of University Women Achievement Award and an Honorary Doctor of Science from Marquette University.

1983: Golden Plate Award of the American Academy of Achievement.

1986: Received the Defense Distinguished Service Medal at her retirement.

1986: Received an Honorary Doctor of Science from Syracuse University.

1987: She became the first Computer History Museum Fellow Award Recipient “for contributions to the development of programming languages, for standardization efforts, and lifelong naval service.”

1991: Elected a Fellow of the American Academy of Arts and Sciences.

1994: Inducted into the National Women’s Hall of Fame.

1996: USS Hopper (DDG-70) was launched. Nicknamed Amazing Grace, it is on a very short list of U.S. military vessels named after women.

2001: The Gracies, the Government Technology Leadership Award were named in her honor.

2004: the University of Missouri honored Grace Hopper with a computer museum on its campus, Grace’s Place. The museum has on display early computers and computer components.

2013: Google made the Google Doodle for Hopper’s 107th birthday an animation of her sitting at a computer, using COBOL to print out her age. At the end of the animation, a moth flies out of the computer.

2016: On November 22, 2016, Hopper was posthumously awarded a Presidential Medal of Freedom for her accomplishments in the field of computer science. The nation’s highest civilian honor.

2017: Hopper College at Yale University was named in her honor.

2021: The Admiral Grace Hopper Award was established by the chancellor of the College of Information and Cyberspace (CIC) of the National Defense University to recognize leaders in the fields of information and cybersecurity throughout the National Security community.

During her lifetime, Grace Hopper fervently believed that advances in computer science would continue to accelerate; she embraced and looked forward to the future.7  Grace was married to Vincent Foster Hopper, but the couple divorced in 1945. They had no children.

Hopper was the first female recipient of the National Medal of Technology. She earned this award in 1991.  On January 1st, 1992, the renowned United States Naval Officer, mathematician, and computer scientist passed away in Arlington, Virginia. She was buried with full military honors.8 Her body is interred at Arlington National Cemetery.5

To honor Grace Hopper and her legacy, Dr. Anita Borg and Dr. Telle Whitney founded Grace Hopper Celebration (GHC) in 1994.  The GHC is a technical conference that encourages women to be part of the computing world. She was an inspirational speaker who encouraged young people to learn to program. Today the GHC is the largest gathering of women technologists, where women from around the world learn, network, and celebrate their achievements.4

Grace Hopper was recognized during her lifetime and posthumously.  She received over 40 honorary degrees from universities worldwide during her lifetime. She has had numerous places, computer-related entities, and organizations named in her honor.  Hopper’s success in a male-dominated field and in male-dominated organizations, including the U.S. Navy, was exceptional.7

After receiving the National Medal of Technology in 1991, she said the accomplishment she was most proud of was being able to train all the young people. She really did love learning and teaching. Her contributions to women in STEM are vast and she continues to inspire women and girls to pursue their dreams in science and technology.